A stone circle is a megalithic monument. The building of stone circles began between 3000-5000 years ago all over the UK and in parts of Europe.  Most were constructed in the late Neolithic to early Bronze Age periods.  History suggests that these early circles were associated with burial grounds or ceremonial purposes, as well as an aid for farmers as calendars for Solstice sunrises and sunsets. The sun would have been vitally important to Neolithic farmers as crops and cattle depended on it.

Stones possess a clear connection to the Earth and may result in a spiritual connection for many involved with them, although building a stone circle does not require a religious doctrine.  Not only are these circles built for  calendars of Summer Solstice sunrise and sunset but also because they harmonize energy and release geopathic stress from the earth. With the creation and use of these sacred sites we can alter the environment, including the weather for the better.  These sites are very much needed today! 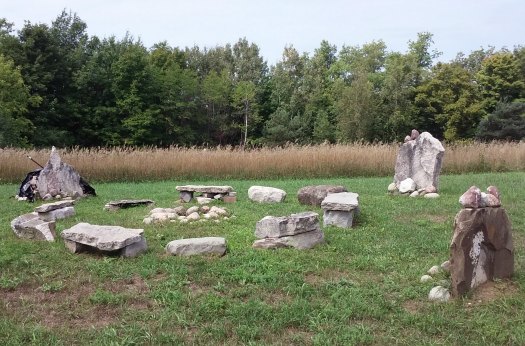 A Stone Circle constructed at the Kripalu Yoga and Wellness Center in Adams Center was a lesson involving the science of physics, engineering, and ancient history; as well as a labor of love! A dozen people, with an age range of 15 to 71 years old, worked together as a team under the tutelage of Jim Juczak. The simple tools of a lever, a fulcrum, three metal pipes, and a wooden plank road of 2×6″ boards were the components for the gigantic task.

The group assembled on Friday evening for a slide show and an explanation of theories of stone circle building. Saturday the event opened with a dowsing lesson by Elisabeth (Bj) Mosher after which all participants were able to dowse each of the stones placements. Throughout the day, after the team dug a large hole for the fire pit, field stone rocks were arranged outlining the fire circle.

Next, seven sitting stones were dowsed and moved into the area around the fire pit. The group then tackled the big four standing stones, with the largest weighing an estimated 1400lbs. The four monoliths were positioned in holes dug deep enough to assure their permanence. Each stone was laid out to the north, south, east and west of the Stone circle. The site was blessed by Steve Williams following the placement of the last stone. The hand picked stones were donated by Allan Newell of Hammond, and Kim Ward of Mannsville. Refreshments were donated by the following Adams and Adams Center businesses: Green Thyme Heath Food Store, Rod’s Big M, Stewarts, Great American, Bob’s Donuts, and Dunkin Donuts.

The Stone Circle is located on the Walking Trail at the KripaluYoga and Wellness Center in Adams Center, NY.

Nancy Pfeil, President of the KYWC, commented; “This first phase of the Stone Circle is a welcome addition to the Yoga Center, our Labyrinth, and the Wellness Trail”.

These areas are open during daylight hours, and are free to the public.  Donations are welcomed!